Do you think bleeding gums from brushing your teeth are normal? Many tend to perceive it as a common occurrence but as a periodontist, I can say with certainty that it is unusual. In fact, you should have it checked and I will tell you why.

The main cause of bleeding gums is due to inflammation and it is one of the indicative signs for a gum disease. Unlike tooth decay or dental cavity, gum disease or also clinically known as periodontal disease, is a silent disease.

Since the patient who suffers from bleeding gums has not experienced any pain, it is often neglected until it is too late. In the worst scenario, it could lead to the patient losing a tooth, especially if it involves gum tissue surrounding the front tooth.

There are two major types of gum disease: gingivitis and periodontitis. Gingivitis is when the disease affects strictly on the gum. In gingivitis, the gum will tend to bleed easily and appears to be reddish and swollen. However, with proper treatment and good oral hygiene maintenance, the inflammation can be controlled and the gum can return to its normal healthy shape and colour again.

As for periodontitis, this disease extends to the alveolar bone, apart from affecting the gum area. When periodontitis occurs, the bone level is reduced and the affected tooth appears to be longer than normal. Eventually, the tooth will become shaky due to reduced amount of periodontium. Even to this extent, there is still no pain to provide you with a forewarning. At most, you would probably only experience a slight discomfort when chewing.

In healthy people, there is a balance between bone deposition and bone resorption to maintain the bone mass throughout the body. With periodontitis condition, however, it creates an imbalance in homeostasis in the alveolar bone, in which the bone resorption is greater compared to the bone deposition. Over time the periodontitis process will leave a defect on the alveolar bone.

Unfortunately, unlike gingivitis, periodontitis process is irreversible and the damage on the periodontium is permanent. However, worry not – in most patients, periodontitis is a long process. Have some comfort that it can be effectively controlled, but only if you are aware of it in the first place.

There is a misconception that gum disease only affects the elderly. The fact is, many patients only realise that they are having it once they are at older age as the disease progresses slowly. Therefore, yes, it can occur in younger people too.

However, if the gum disease is detected in younger individuals, it suggests that they are likely to have a specific genetic trait that makes them more susceptible to the disease. For this group, the gum disease would advance more rapidly than it would in other people. It is also imperative for this group to engage in preventive measures as early as possible if they were to halt the process of tooth loss.

Now, knowing what I know, maybe it is wise for you to recall your gum situation while having your teeth brushed this morning. If you remember any regular bleeding, I hope you visit your dentist to get them examined today before it is too late. 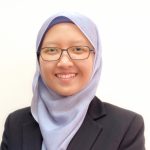 Dr. Nor Haliza Mat Baharin works as a Periodontist and Clinical Lecturer in Periodontology for the Faculty of Dentistry in Universiti Sains Islam Malaysia. 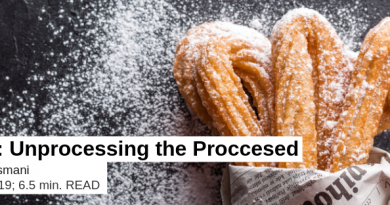 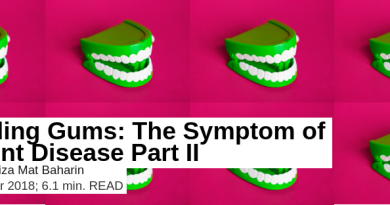 Bleeding Gums: The Symptom of a Silent Disease Part II